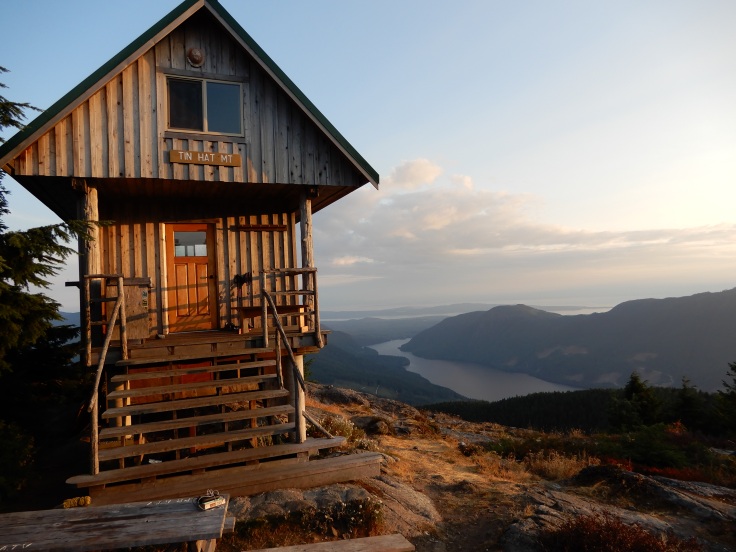 Last weekend, we hiked a very small part of the Sunshine Coast Trail, a 180 km hut-to-hut trail north of Vancouver. Because we only had one vehicle to work with, and the price of getting a shuttle to pick us up along the trail was fairly steep, we opted to do a loop this time around. Plus, we really wanted to include Tin Hat Mountain in our trek, which is easily accessed via a 2 day loop from Lewis Lake.

Here’s a rundown of our 2 days on the trail, broken down into sections, including stops in Powell River. Let me know if you have any questions or, if you’ve done the hike, suggestions for next time!

The ferry runs 4 times daily from Comox (Vancouver Island) to Powell River (Sunshine Coast), and takes about 1.5 hours. You can also drive the Sunshine Coast from Vancouver, which includes 2 ferries.

Powell River was a cute little town! We had some time to kill once we arrived, so we headed straight to Townsite Brewing; they had great beer, arcade games, and they’re the sponsor of Tin Hat Mountain hut! We had dinner at Costa del Sol, which had so-so food and service, but a fabulous atmosphere and ocean views from the cozy patio.

It’s about a 1 hour drive to the parking pull-out by Lewis Lake from Powell River, which is mostly along gravel logging roads. On weekends, you can drive in anytime, but on weekdays you need to go before 8am or after 6pm to avoid any logging traffic.

We followed directions in the recommended Sunshine Coast Trail book, which were slightly confusing, but got us there eventually (with Google maps as a back up). We were *pretty sure* we’d found the right parking pull-out beside a bridge, and *even more sure* when we saw the SCT signs by a trailhead off the road! By the time we started hiking into the mossy forest, it was at least 7:30, and the sun was going down fast. Not to worry, we thought, the book made it sound like it was only about 10 minutes to the campsite at Lewis Lake. An hour later, realizing that we wouldn’t be making it to the campsite that night, we started scouting out potential flat-ish camping spots. At this point, the sky was full-on dusky, and the forest trail was even darker. As soon as the path veered back out along the lake, we found a kind of flat, super branchy, almost tent-sized spot right by the lake, and pitched our tent! 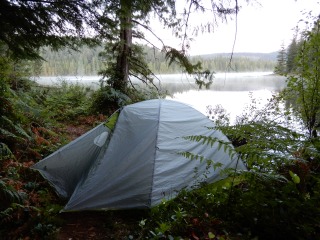 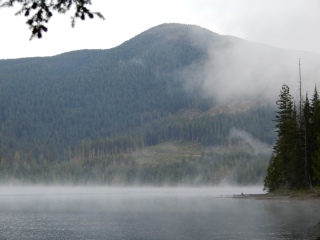 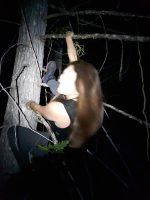 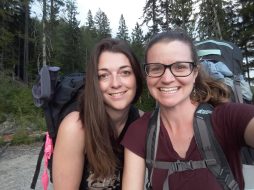 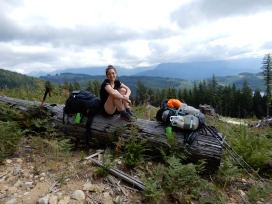 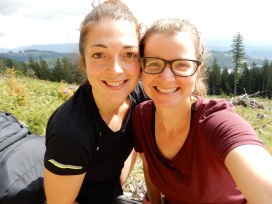 The next day brought morning mist on the almost silent lake, and a beaver friend! We set off early, unsure how long it would take to get around the lake, to Tin Hat trail, and then up the mountain itself. Less than 5 minutes from our badass wilderness camping spot… was a campsite! This obviously didn’t exist when our trail guide was published in 2013; I’d definitely recommend using this map instead (posted below if the link doesn’t work).

Lewis Lake trail leads through the forest over some light ups and downs, past Spring Lake to a logging road. There’s no water on Tin Hat Mountain, so make sure you fill up at or before Spring Lake as this is your last option.

Things got a little confusing when we hit the logging road (Spring Lake Main). The SCT South continues directly across the road, towards March Lake. We took it for a few minutes, wondering if there might be a fork north towards Tin Hat, but decided not to take the risk. We circled back to the logging road and started walking north along it, and eventually came to more SCT and Tin Hat Mountain signs, woo! The base of the mountain was well-marked, with a detailed map and signage. You can also drive along the logging road to a parking spot within an hour’s hike from the summit, which is ideal for day hikes.

The hike up Tin Hat is CHALLENGING – it’s steep! A lot of the trail is made up of big, loose rocks, and it weaves in and out of the forest. If it’s a hot day, make sure you wear sunscreen; we got pretty warm on sections where we were exposed. These open areas had stunning views, although there was also tons of clear cutting and logging the area, which was kind of disheartening.

It was a slowwww hike up – I wasn’t as careful with my packing as I had been on the Juan de Fuca trail last year (because it wasn’t going to be as long a hike so we could pack more?! Durrr we were climbing a mountain!?!), so I took my time. We also had to conserve water because we hadn’t filled up enough at the creek by the lake, not realizing it would be the last source.

By the time we clambered over some rocks and first glimpsed Tin Hat Hut, I’d exhausted all of my “final pushes”, so even though I felt like running and jumping I couldn’t do much more than slowly hobble to the hut. We dropped our packs outside and peeked in. The hut was fantastic; it’s fully winterized for snowshoers, there’s a pellet stove (not usable when we were there), a kitchen table and wooden counters for cooking, and a sleeping loft. It could sleep about 8, and there was more room in a ‘basement’ below for overflow. We staked out a spot by the window, then went out back out and melted onto the rocks in the sun!

We pretty much stayed on the rocks all day, resting our muscles and taking in the panoramic views. We listened to podcasts, drank our reward beers, and didn’t move much until the sun set and it got cold.

Some day hikers had left us some of their extra water which was a HUGE gift – we were actually able to cook a hot meal (and have enough water not to be dehydrated)! We had to share the hut with a few German hikers, but otherwise everyone else who showed up during the day (maybe 8 people total) had hiked on. I’m not so much a communal sleeper these days (I have mega sleep issues to begin with)… but I’ll take it when it’s freeee! 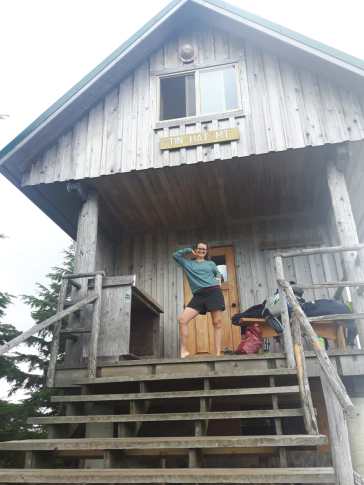 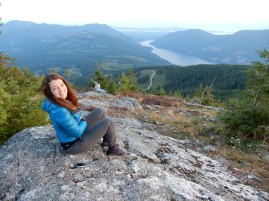 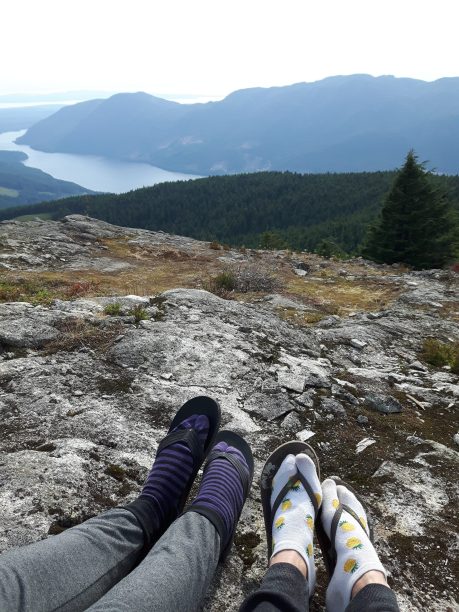 The next day, we were surprised to wake up to RAIN, after weeks of heat and forest fire smoke. It was light but consistent enough to cloud all over the views, so we were glad we’d had a perfect day the day before! We’d been planning to hike up to the summit (just ~20 minutes from the hut) but by the time we were ready the fog had fully set in, so we decided against climbing up slippery rocks with nothing to see at the top.

Rain coats on, we started our descent down the East Ridge of the trail. As downhills are, it was HARD! We were glad we brought hiking poles but sometimes just opted to use our bums on more slippery rocks. Overall it was a better day for me because I’d managed the weight distribution in my pack a little better (plus, shorter hike), but my legs still got a massive workout!

Again this trail weaved in and out of the forest, with lots of switchbacks, and a few steep ups and downs but no large loose rocks this time. We had been considering camping another night, but with the rain there wouldn’t have been much to do, plus we never found the campsite that was marked in the book! Based on the more current map (below), it looks like it may no longer be there.

After about 4 hours (including lots of little breaks), we came to a logging road… and our car! We’d completed the loop! We threw off our backpacks, grabbed the all-dressed chips we’d cleverly saved for the drive back, and worked our way back over the logging roads to the 101, only getting a *little* lost.

Back to Powell River:

We had some spare time before the ferry back to the island, so we thought we’d head south on the 101 towards Saltery Bay, where there’s a ferry connection to the next part of the Sunshine Coast. Since there’s a ferry, we thought there’d be a cafe or something, but nope! There is a provincial park which I’m sure is beautiful, but we weren’t super mobile at this point. So back to Powell River we went: Base Camp Coffee was the perfect place to hang out for an hour with hot drinks, baked treats, wifi, and books.

We picked up the ferry back to Comox at 5:15, enjoying some car Ramen on the trip thanks to some boiling water from the on board cafe! Minus a borderline panic attack on my part with some dusky driving (/hanger, tiredness, fear of the Malahat, my general anxiety surrounding driving, etc etc.) and Kyla gallantly taking over, it was a smooth ride back to Victoria! 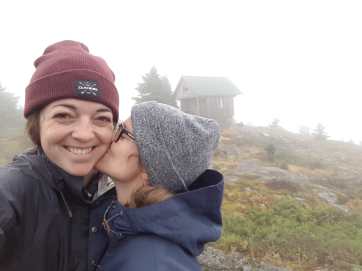 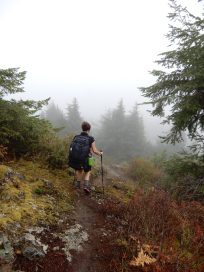 Overall, despite the challenge, the Tin Hat Mountain/Lewis Lake loop was a great hike. The SCT is really well-marked, thanks to PRPAWS who maintain the trail and run an informative SCT website. No matter where you’re standing on the trail (on the section we hiked anyway), you should be able to see orange markers and ribbons. It was also quiet! We only saw 2 hikers each day, plus a few more on the mountaintop. I understand why the trail book could be helpful for people who are hiking the whole/longer portions of the trail – it has good summaries and GPS coordinates, but I personally didn’t find it that useful for our loop. It doesn’t go into much detail about distances, terrain, or water sources, whereas there is quite a bit of excess description about the history of the area – interesting but just not so relevant for us. Campsite information was more up to date on the map I received from the wonderful people who run the Sunshine Coast Trail Facebook group; this map was also available in the hut to take pictures of, and at the base of Tin Hat, and I assume elsewhere on the trail.