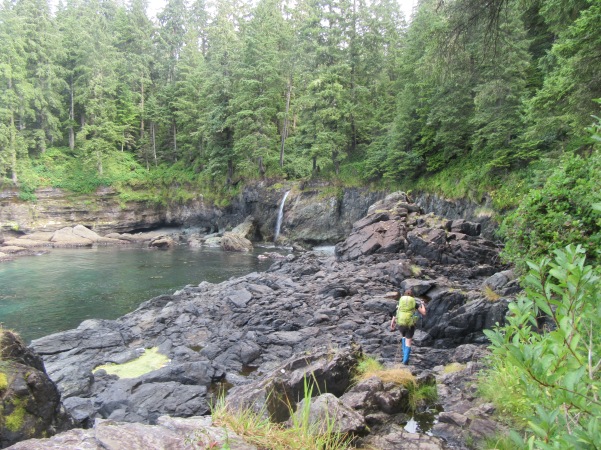 This was the day I tried to get eaten by a bear! 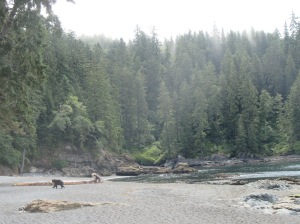 Day 3 started out like the others, only a little wetter. We got up early, and headed out towards Little Kuitshe Creek, where we were planning to camp that night. 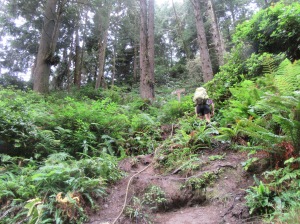 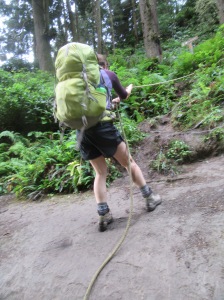 The hike from Chin Beach to Sombrio Beach started out with some steep ups and downs, similar to the previous day, but this time they didn’t go on forever. There was a flat bit! And a few creek crossings with ropes, but these were fun and we made them look more dramatic in photos than they really were! 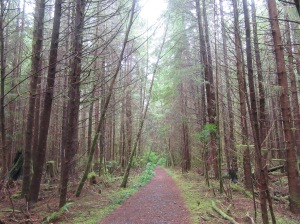 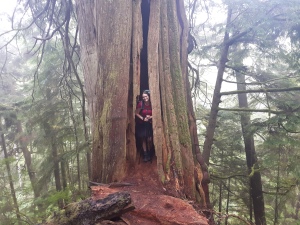 Since it had rained the night before, the day brought a new challenge: mud! We’d encountered muddy spots before, but for the most part, we’d been able to manoeuvre around them, using rocks and tree stumps and packed down patches.

But today, we got the gaiters out! We knew we’d packed them for a reason! We couldn’t really avoid trekking through deep mud just east of Sombrio Beach, but at least the gaiters helped keep it out of our shoes. (Unless you have brilliantly designed boots with a breathable mesh front, like mine! Mud for days!) 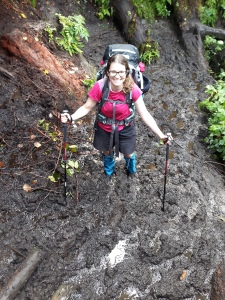 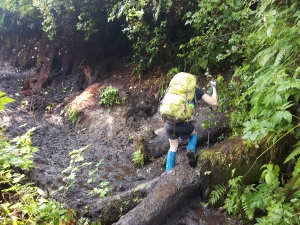 As we made our way onto Sombrio Beach, we met a woman who told us that there was a bear on the beach! “Don’t worry,” she informed us, “it’s a local, it’s friendly, and it won’t come too close”. We were delighted to see the black bear, looking for snacks on some rocks in the water.

We stood watching – at a very safe distance, with other campers – and I decided that this would be a good time for lunch. “Not here!” Kyla whispered, her expression incredulous, as she gestured towards the bear. “Oh, duh! Silly me!” I laughed, taking a half-eaten Cliff Bar out of my backpack. “I just needed a quick snack though,” I explained, shoving the remainder of the bar into my face. She shook her head at me, as we both continued snapping shots of the gorgeous bear. 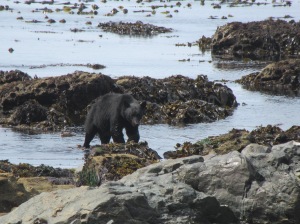 *Completely coincidentally*, right around the time I was finishing off the Cliff bar, the bear slowly turned towards us. It seemed to decide that, having found no saltwater treats, it needed a change of scenery. Again, slowly, it started ambling in our general direction. “Whoa, cool!” I whispered. Kyla was looking at me, eyes wide, probably wondering why she’d agreed to do this with me. “Babe, it’s time to go!” A few more clicks of the camera, and I reluctantly followed her further down the beach. As we watched the bear lumber right up to the spot where we’d been standing minutes earlier, I was incredibly grateful that my West Coaster girlfriend had been level-headed and forced me out of my camera-happy stupor! 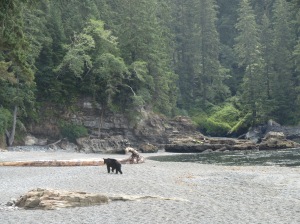 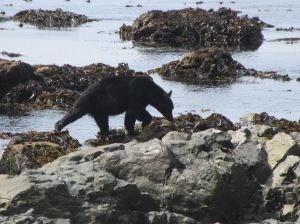 The people who’d been standing beside us a few moments ago hadn’t been smart like us, they stayed, taking photos. We watched them slowly backing away as the bear approached, awkwardly waving their can of bear spray, as if the bear knew what was in it. “God, what idiots,” I said, shaking my head and rolling my eyes. Kyla gave me a look. The bear looked bored, and headed into the forest.

So yes, as the story goes (according to Kyla), Leslie tried to get eaten, and Kyla saved her.

At an actual safe distance from the bear, we took a lunch break. Once we found the orange bobbles leading us back onto the trail, 5 more kilometres of hiking brought us to Little Kuitshe Creek! We’d made it! But… did we want to stop? I felt I had a bit more in me that day, and 7 more kilometres would bring us to a campsite much closer to the end of the trail. I loved the idea of an easy last day! 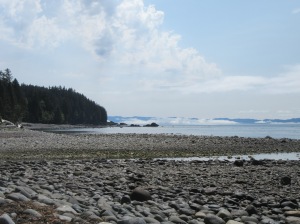 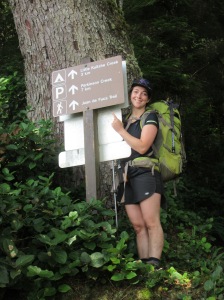 We didn’t really know how to make the decision. We wanted to stop, because our bodies were telling us we needed to stop. But we wanted to wake up closer to the end of the trail. As we flopped down near the trail map, we saw a Swiss family walk by. We’d taken turns passing each other on the trail, and we figured that if they were still going, we might as well go too! We’d all be arriving at camp around the same time.

Bad decision! We were too ambitious, and each kilometre seemed never-ending. This was where the psychological challenge set in! We barely made it 4 km to Parkinson Parking Lot, between the two campgrounds. Our bodies were rebelling, and we were ready – like literally preparing – to set up camp on a patch of grass beside a parking lot. There was no bear cache, or water source, but there was an outhouse, and we’d figure something out. We took Tylenol, which began working its magic, and I took the heavy, wet fly from Kyla’s bag, trying to even the load. As we waited, somewhere between having made a decision and being really unsure about it, the Swiss family caught up. We chatted a bit, and “invigorated by their accents and determination” (Kyla), we told ourselves it was just 3 more km, and kept hiking. 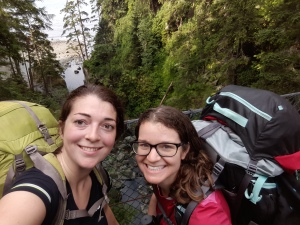 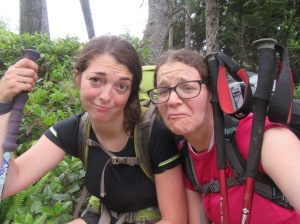 About 2 minutes later, we came to some grassy patches that actually looked like they could be campsites. They were near a stream, with a bridge overhead where we could hang our food. “Ok… JK, let’s sleep here,” we decided. We took off our packs, and headed towards the stream to filter some water. The only other people camping in the area were two guys in their 20s, and their two growly dogs. We approached them to find out how to get down to the creek, and they let us climb through their campsite. Great! They were smoking pot and drinking beer but, ya know, cool – they were enjoying themselves! They weren’t hiking or anything… just camping there… beside a parking lot. A little strange, but to each their own, we reasoned. We got our water, but as we got back to our packs, we looked at each other with the same thought: “Did they seem a little creepy?” We really had no way to determine whether we were being smart or paranoid, but we didn’t feel like finding out. (Also, apparently one of them looked like a villain from Orphan Black.) Decision made! “Invigorated by their sketchiness” (Kyla), we decided to keep going! 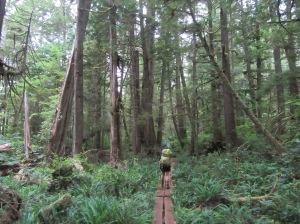 The kilometres stretched on forever, but the trail was fairly flat and didn’t seem so bad anymore. It started to rain right before we reached the campsite; we were so invigorated!! Finally, there it was, Payzant Creek and the 40 km sign!!! We’d ACTUALLY made it! We put up our tent SO quickly in the rain. So much for the hot meal we’d planned for that night, we inhaled protein bars and mixed nuts, and dove into our warm, dryish tent! (This involved carefully leaving our wet, stinky, muddy stuff and packs rolled up in a tarp in the outer vestibules.)

We were in too much pain for massages, so it was podcast time. The rain (and exhaustion) put us to sleep around 8pm, before our last day on the Juan de Fuca trail!

I’m Leslie (Les Talk!): an introvert (Less Talk!) who is also super gay (Lez Talk!), and loves to travel (More Travel)! Les Talk, More Travel is about local and international adventures for intrepid queers, lovers of the Pacific Northwest, and other interested humans!